Ecology and Conservation of Graptemys 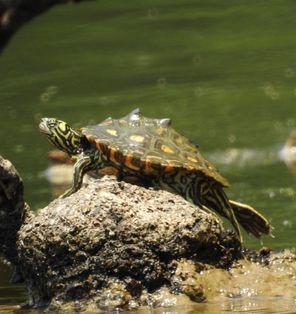 Male Yellow-blotched Sawback
The genus Graptemys (Map turtles and Sawbacks) contains 14 species, the most species of any North American turtle genus.  Eight of these species are endemic to single river drainages of the southeastern United States.  Even though the genus has a large number of species, we still know little about their basic life history and ecology.  Their taxonomy has been equally challenging, with six Graptemys species described between 1950 and 2000. The last formally described species, G. pearlensis (Pearl River Map turtle, in 2010), further underscores the little we know about the genus.  It is possible that additional "cryptic species" may occur and be described in the future.

Unfortunately, many Graptemys species are considered species of concern or considered state threatened/endangered.    There are many threats to Graptemys species, and most threats are associated with loss of riverine habitat and habitat alteration.  The latter includes the desnagging of river systems (removal of fallen trees that provide basking platforms and substrate for food items), construction of reservoirs, river channelization, excessive water withdrawal, and water quality degradation. Additional threats include the intentional shooting of turtles, collisions with boats, collection for the pet trade, fisherman by-catch, and the destruction of nests on sandbars by recreational ATV riders.​ 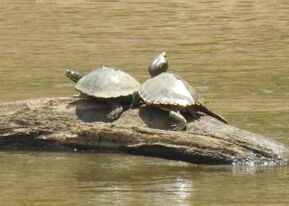 Basking females of G. oculifera (L) and G. pearlensis (R)
​Pearl River Graptemys Surveys in Louisiana
Currently, I am focused on population surveys of  Graptemys oculifera (Ringed Sawback) and Graptemys pearlensis (Pearl Map Turtle) in southeastern Louisiana.  I surveyed for both species during the summer 2020 at several locations on the Pearl and Bogue Chitto rivers, and I also surveyed many smaller tributaries, many of which have not been previously surveyed.  I will complete a second year of surveys in 2021.  Sizable populations of G. oculifera including adults and juveniles, have been found in several locations, while Graptemys pearlensis occur in much lower densities.
​ 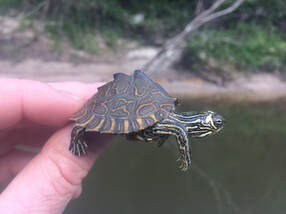 A colorful G. gibbonsi juvenile
​Population Genetics of the Pearl Map Turtle (G. pearlensis) and Pascagoula Map Turtle (G. gibbonsi)
As part of a collaborative effort with Luke Pearson and Brian Kreiser (University of Southern Mississippi), Bob Jones (MS Museum of Natural Science), and Peter Lindemen (Edinboro University), we are working to determine the extent of genetic diversity in both G. pearlensis and G. gibbonsi .  Numerous tissue samples for both species have been collected over the last 10-15 years, but there are significant gaps in the sampling.  During the summer 2018, I sampled for both species in the Pearl and Pascagoula drainages to fill in these sampling gaps to help us better determine population genetic variability in both species.  University of Southern Mississippi graduate student, Luke Pearson, will be using population genetic tools to assess genetic variability and the potential population structure for both species.
​ 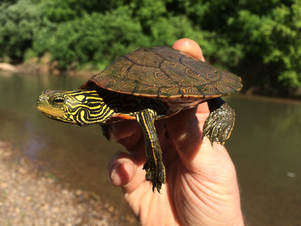 During the summer 2017 and 2018, USM graduate students and I surveyed Bear and Cedar creeks in Tishomingo County and documented G. geographica in both streams.  This included the first specimens for G. geographica that were deposited in the MS Museum of Natural Science.  Surveys were completed and a publication of the results should be soon!
​ 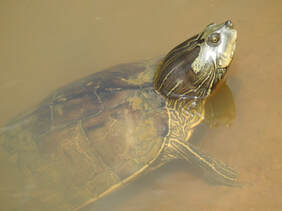 Large Graptemys pulchra female in Tombigbee River drainage, MS
Surveys for Rare Graptemys Species in Northeastern Mississippi
Relatively little is known of the population status of two rare Graptemys species in eastern and northeastern Mississippi (G. nigrinoda & G. pulchra) and one introduced species (G. ouachitensis).  In 2019 and in collaboration with Ryan Dumas (Cincinnati Zoo & Botanical Gardens) and Marks McWhorter (St. Andrew's High School), we surveyed numerous locations in 9 counties and observed relatively few G. nigrinoda and even fewer G. pulchra.  Future surveys in the middle portion of the Tombigbee River system in Mississippi are planned, and they should provide more insight on the status of these two rare species. 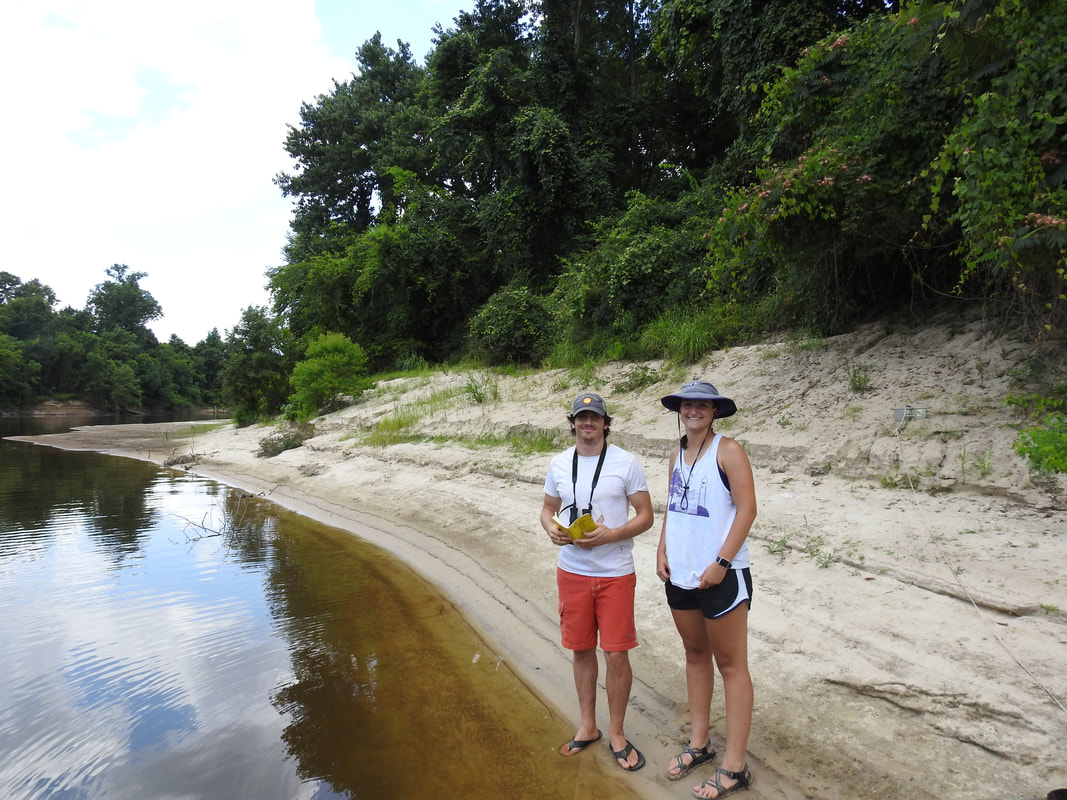